Vulcan Energy Resources has agreed to acquire an operational geothermal renewable energy power plant in the Upper Rhine Valley at Insheim, Germany, through the acquisition of 100% of the shares in the entity which owns and operates the plant. A new Germany subsidiary of Vulcan, based in Karlsruhe, will be the owner and operator of the Insheim Plant.

Purchased for approximately €31.5 million, utilizing a portion of proceeds from the recent A$200-million capital raise, the acquisition of the Insheim Plant establishes Vulcan as an operational renewable energy business. 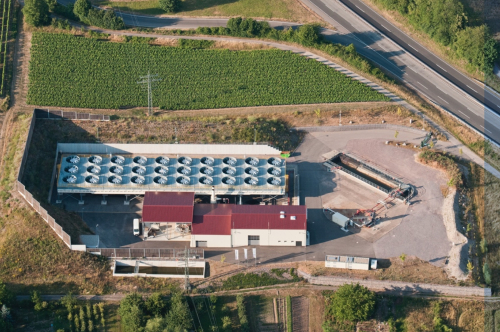 Owned by regional energy supplier Pfalzwerke AG, the plant currently has the technical ability to produce a maximum of 4.8MW renewable power, equivalent to approximately 8,000 households, with an additional ability to produce heating. The plant is producing 2.9 MW of electricity on average.

Vulcan expects the Insheim Plant will be a source of revenue, as it reported sales of €5.8 million and an EBITDA of €2.9 million for the financial year ending 31 December 2020. The plant presently capitalizes on the Feed-in Tariff for geothermal power.

The Insheim Plant currently pumps lithium-rich brine to the surface for geothermal energy generation before the brine is reinjected into the reservoir.

Vulcan will formally take over the plant from 1 January 2022 and will retain all existing local employees as part of the transition. Vulcan also plans to invest in the expansion and modernisation of the power plant.

The acquisition of the Insheim Plant is consistent with Vulcan’s strategy to acquire and upgrade existing brownfield renewable energy and brine infrastructure and to de-risk and grow our Zero Carbon Lithium Project. Funded with a portion of the proceeds from our recent $200 million capital raising, which was strongly supported by existing and new institutional investors, the acquisition demonstrates our willingness and ability to capitalise on strategic opportunities to ensure timely project development. This is a significant first step in establishing Vulcan as a revenue generating, renewable energy producer. German State and Federal policy increasingly supports decarbonizing heating and power grids, with a focus on decentralized, renewable energy, and Vulcan intends to build a number of distributed geothermal renewable energy plants across the Upper Rhine Valley region.

Combined with our brine offtake agreement with the Landau plant, we will work to assess the feasibility of integrating lithium extraction from these areas into our development plans. The Vulcan team remains focused on developing our world-first dual renewable energy and Zero Carbon Lithium business, with phase 1 production to supply the EU battery market targeted for CY2024.

Brine offtake. In addition to the acquisition of Insheim, Vulcan Energy has executed a 20-year brine offtake agreement with geox GmbH, the operational Landau geothermal renewable energy plant in the Upper Rhine Valley owned by the IKAV Group, a Luxembourg-based renewable energy fund manager and operator.

Under the terms of the agreement, Vulcan has the right to purchase and extract the lithium from the brine produced from Landau, and return it to the plant for re-injection, with expected brine volume from the production well of at least 100 l/s, subject to the financing and drilling of a re-injection well which can accommodate the current production well flow, and with an offtake start date of 30 December 2024.

The existing production well at Landau has the tested ability to produce at a rate of over 100 l/s, but an additional re-injection well is planned to help accommodate this flow.

In addition, subject to obtaining the relevant permissions from the authorities, the Landau plant will provide access to accommodate Vulcan’s demonstration lithium extraction plant, with a target start-up date of Q2 2022.

Vulcan has been successfully operating its first lithium extraction pilot plant at Landau since April 2021. Lithium grades in the brine from Landau well GTLA-1 are approximately 180 mg/l Li. Vulcan will seek, subject to positive feasibility studies, to incorporate this offtake agreement into its Phase 1 development plans.

Vulcan will assess the feasibility of extracting and processing lithium from these projects, as part of investment into an expansion and modernization of these areas, to be incorporated into planned operations. As a result, Vulcan is targeting completion of its Phase 1 DFS in H2 2022, updated from its previous target of mid-2022, to accommodate the inclusion of more project areas into expanded production studies. Vulcan’s target of first commercial production of lithium by 2024 remains unchanged.

Probing the Growth Potential of the Geothermal Industry

Two weeks ago, at an energy conference in San Francisco, I glimpsed a powerful and optimistic vision of the future of energy and transportation.

The conference was the West Coast Geothermal Development and Finance Workshop. And the vision was offered by Brent Cook, the CEO of Raser Technologies, Inc. (RZ).

Imagine a future where we drive around in plug-in hybrid electric cars, sipping tiny amounts of liquid fuel, and mostly running on batteries that power next-generation, high-efficiency electric motors.

Imagine that all of the grid power they run on is generated and consumed without any emissions of any kind. In fact, without any detrimental effects on the environment whatsoever, and without using any fuel.

Imagine that it was all done using clean, green, renewable energy right here at home, and didn't send a dime overseas.

That is Raser's vision, and they're making it a reality with their "wells to wheels" approach to the problems of oil depletion, oil dependency, and global warming.

One side of their business focuses on the components that will run these steam-powered cars. Their Symetron electromagnetic motor system, designed for use in hybrid cars, got the Frost & Sullivan 2006 Technology Innovation of the Year Award.

The Symetron system is an AC induction motor that can function as both the alternator and the starter. It's only four inches long, a lightweight 66 pounds, and can deliver 64 horsepower with 170 lb/ft torque to start the car moving. That's a lot of punch in a small package!

When functioning as a generator, it delivers a whopping 20 kW of power, enough to recharge the car's lithium-ion batteries and still run all the accessories.

That makes it what the Frost & Sullivan analysts called a "disruptive technology," something that can really change the paradigm . . . in this case, of transportation.

The increased power, lower cost per kilowatt, high torque and high reliability of the Symetron motor can help make plug-in hybrids an economical reality for millions.

No wonder Raser has been hard at work getting their system ready for mass production and striking partnerships with key players to manufacture it.

The other side of their business generates the power to run those cars most of the time, from the cleanest and greenest of energy sources (and my personal favorite): geothermal power.

Power harvested as heat, oftentimes steam, from a hole in the ground.

Using a variety of licensed technologies and advanced "binary cycle" generator units made by United Technologies (UTC), Raser is in hot pursuit of the geothermal potential of the West.

They've been buying up leases left and right for the last few years, and now hold leases on 34,000 acres in Utah and additional acreage in Nevada.

Like other renewables, geothermal energy systems require no fuel inputs, per se. They just borrow a little heat and move it elsewhere.

Even better--and this is the part that really gets me fired up--they can potentially use waste heat from other industrial processes as their heat source.

Even dried up oil and gas wells can be energy sources.

These generators are basically overgrown refrigerators running in reverse. "The organic Rankine cycle-based power system is an advanced binary cycle system that is driven by a simple evaporation process and is entirely enclosed, which means it produces no emissions," according to their press release.

Essentially, they take about 30-40 degrees from the hot side (such as a hot hole in the ground) and dissipate it to the cool side (using an air-cooled heat exchanger on the surface), turning a turbine as they do so.

The turbine spins as the refrigerant fluid (something like Freon) cycles through the system and is heated and cooled. It's the temperature differential between the two sides that makes the system work.

So even if you have to dissipate the heat with an air cooled system in the hot desert sun, as long as the temperature of the heat source is at least 140 degrees hotter, you're good to go.

And at night, when it's cold outside but still toasty underground, these babies really sing . . . pumping out their best power precisely when solar panels are nonfunctional.

Put one of these units next to another industrial operation--say, a smelter or a paper mill--where you've got a lot of waste heat being generated, and dissipate it to, for example, a shallow, cold underground aquifer, and you're basically harvesting free energy. You're making use of otherwise wasted BTUs while incurring no harm to the environment.

Now that's a hot technology. And I think it's very, very cool.

Raser announced its Q1 financial results last Tuesday, showing good revenue growth but widening losses due to stock grants and other expenses for professional services. In other words, your typical development-stage growing pains.

They also recently announced that they are buying 135 of United Technologies' 225 kW units and partnering with them to build their next 30 MW project.

And the next plant they build after that is going to be much, much bigger, using 1 MW generators.

Looking at their future, I see a great business. It's as clean and green as it can be. Here are a few of the benefits:

Not only that, the growth potential of the geothermal industry is enormous.

A report Raser released back in March showed that just one of their leased properties in Nevada could potentially support 300 to 500 megawatts of power generation . . . again, in a relatively tiny footprint.

Of course, Raser isn't the only geothermal power company in the game, nor the only suitor for the Earth's virtually inexhaustible supply of heat energy underground.

Two weeks ago, Merrill Lynch announced that it had made a $35 million investment in Vulcan Power Co., a private company and one of the largest geothermal property holders in the U.S.

"We believe that an investment in Vulcan is critical to accelerate development of geothermal resources that benefit the environment," said Rob Jones, the head of the Merrill global energy and power group.

But that's just the first round. In total, Vulcan intends to raise $150 million to develop some 900 MW worth of geothermal energy from its portfolio.

We'll be probing the depths of the geothermal space--hopefully with fewer overwrought metaphors--in much greater detail in the coming months, so stay tuned.